What Is PR2 Lite?
PR2 Lite a home-brewed robot that is meant to have all the capabilities of PR2 from Willow Garage.  We wanted to create a robot that could be used like the PR2, but not cost $400,000 — the price of a PR2.  We use ultra low cost components such as the $150 Kinect, the low-cost lidar used by the Neato robotic vacuum cleaner, servos with feedback such as AX12+ servos.  ROS (Robot Operating System) provides most of the intelligence.  I am part of a team composed of 4 high school roboticists and their mentor fathers.

We also have a second article in the August 2013 issue of SERVO Magazine, which I co-authored.  This article deals with PR2Lite rather than PRLite. 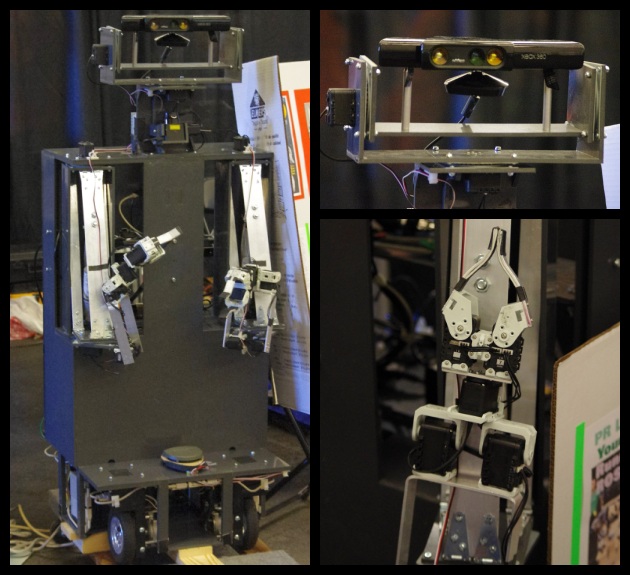 Comparison with PR2:
As shown in the table below, the capabilities of PR Lite are analogous to those of PR2, but are lower quality.

* part currently not installed on robot

RoboGames 2011 demo:
This is a previous prototype of PR2 Lite called PR Lite.

Our PR Lite prototype was demoed at RoboGames 2011, occupying the booth next to Willow Garage and PR2! Our demo featured PR Lite’s arms mimicking a person’s arms. A Kinect used the OpenNI library to find the subject’s skeleton. This skeleton was transformed into spherical coordinates (with a radius), and inverse kinematics were used to position PR Lite’s arms. The arms were made from the Bioloid comprehensive kit constructed to be similar to two Crustcrawler arms. ROS packages from the University of Arizona were then used to control the arms.